Pay attention to what's behind the curtain 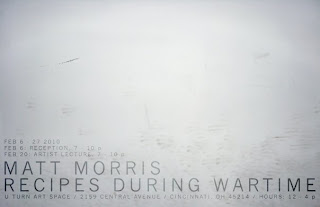 U·turn Art Space is pleased to announce a solo exhibition by one of its collective members, Matt Morris. Recipes During Wartime is a site specific installation characterized by a transparent veil ensconcing the central portion of the gallery. Within the veil Morris presents a floor installation involving powders, an array of subtle objects, and experiments with lighting and scent. The work developed alongside Morris’ research for his upcoming lecture “After the Party: Artistic Hindsight as Crowns Were Passed at the French Revolution and the Localvore Revolution” at the 6th Conference on Food Representation in Literature, Film and the Other Arts in San Antonio, TX. Almost as if laying out a picnic feast for gathering ghosts, the installation within the veil becomes the charged focus of the room. The artist asks viewers to project themselves into a space that is right in front of them but cannot be entered. In this brand new installation, Morris is interested in inquiring into and exploring our psychologies as they relate to place, memory and the edges of perception. 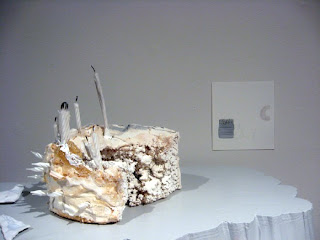 Morris's work evokes museum period rooms, haunted houses, and the occasional sick room. With the use of pared down materials, edible ruins, and a multitude of tricks of light and scent Morris creates installation experiences that cause one to question what they are seeing, and often, to desire a second look. Recipes During Wartime melds together various elements resulting in a theatrical melancholy likened unto the grief of Miss Havisham's moldering banquet. The wrecked meal is an oft repeated image in the work; using a shopping list's worth of ingredients Morris concocts suppers in various states of disorder strewn across the gallery floor. Spilled champagne, charred crumbled cake, flour, dough bits and other ephemera become circumstantial evidence of recent and past transgressions. One gets the feeling that something happened here. In an era of the neo victory garden (ala Michelle Obama) and the CSI franchise, Morris teases us with glimpses at a suggestive narrative full of multiple truths and intrigue. 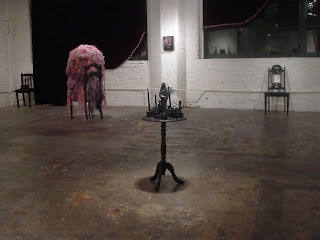 Along with the use of foodstuffs, the curtain as an art object has made appearances in Morris' work in the past, but in this new body of work functions quite differently than in previous manifestations. In his thesis work, Rococo With a Death Wish, Morris included in his senior exhibition a pair of weighty black velvet window treatments with hints of worn fringe and pink poms that were installed in the gallery over the windows. These behaved in much the way one expects curtains to behave, but were on another level working to create a mood to the room at large. The sumptuous fabric and drape of these curtains reminded one more of a pall than of anything else. In contrast in his current work, specifically in Recipes During Wartime, the concept of the curtain is transformed into something more reminiscent of a gauzy force field. The installation appears separated from the viewer behind a foggy veil that both obscures and reveals little glimpses of a scattered tableaux. The artist choreographs a scene rife with spectral presence, an arrangement of objects and dusty minerals. The combined elements become a sort of garden of medicinal and decorative herbs hidden in an inner sanctum. Morris' work is a gathering of nostalgia and fragility that has been kneaded and shaped and is remarkably appropriate to today's social and economic climate. The work rations its visual impact and feeds the viewer an appropriate combination of frivolity and frugality, and leaves an aftertaste that remains long after the party has ended. 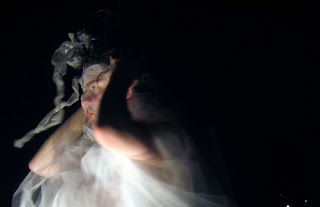 Test photo from research work for "Pairs Well With" at Aisle Gallery, 2009,
and "Recipes During Wartime" at U.turn, 2010.

Matt Morris is a transplant from southern Louisiana and a graduate of the Art Academy of Cincinnati. He makes art and writes. Art meaning installations of fragile objects, video, sound, painting, and a lot of unquantifiables. Writing meaning poetry, art criticism, journalism, recipes, and other notes. His art criticism appears regularly in regional and international publications, including Art Papers, Sculpture, City Beat, White Hot Magazine, Alice Blue Review and Aeqai. He has presented exhibitions, lectures, and poetry performances in regional art venues, such as Aisle Gallery, semantics gallery, the Carnegie Visual + Performing Arts Center, Artworks, Nicholas Gallery and Murmur Gallery. Morris is a curator with the venerable alternative arts space semantics gallery and a founding member of the gallery U · turn Art Space. He creates works that address, deconstruct, and make peace with forces of abstract thought. They express an interest in the places where concrete ideas fall back into ambiguity and where poetics, aesthetics and nostalgia influence discourse.
Recipes During Wartime: An Installation by Matt Morris

Posted by Molly Donnermeyer at 11:43 AM